Although I grew up in church, I didn’t really grasp the audacity of grace in my life.

Audacity (n.): bold or arrogant disregard of normal restraints, the quality of being surprising or shocking

I used to think I had a lousy testimony because I grew up in a Christian family and didn’t rebel against my parents or my faith. I had prayed to “ask Jesus in my heart” when I was five, and I sincerely believe that was the beginning of my faith journey. Over the years, I learned more about God and accumulated a lot of head knowledge about the Christian walk. At 13 I was baptized and began to take my spiritual life more seriously.

But it was about that time that I also began to suffer goody-two-shoes syndrome, which manifested itself in two completely polar ways:

How could these two diametrically opposed ways of thinking both characterize me? I believe it’s because I had a flawed view of grace. 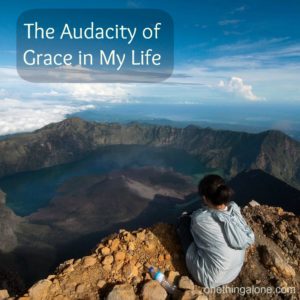 I had bought into the notion that grace was important primarily for one’s salvation but became less so for the rest of one’s life. The more gruesome a person’s pre-salvation experience, the better: that made God’s grace all the more evident in that person’s life (see #1). But after that initial decision to follow Jesus, it’s up to the individual to develop the spiritual disciplines, say “no” to all the junk this world offers, and live a pious life. …Right?

I had little use for God’s grace in my life after the point of salvation. In my limited understanding of the Christian journey, I thought it was all on me. And most of the time I thought I was doing pretty well (hence #2).

Ironically, it wasn’t until I struggled with habitual sin in my own life in college that I recognized I needed God’s grace every day.

The cycle was ugly: I would do fine for a little while –> then sin –> wallow in guilt –> be convicted about being distant from God –> shyly ask God for forgiveness –> cautiously rejoice in being forgiven and having a fresh start –> fight temptation –> sin [repeat].

I fought temptation. I memorized fighter verses. I asked Christian women for accountability. I wept inconsolably. I asked God to liberate me.

Nothing worked. The cycle was on endless repeat. For months at a time, I dreaded waking up in the mornings because I knew I would fail yet another day.

I only stopped battling that sin when I was removed from the situation. I can’t say I overcame the sin; God graciously ended that chapter in my life by making it a non-issue.

And for a long time after that, I struggled with guilt. How could I have been such a terrible Christian? How could God still love me? How could He, the holy and righteous God, forgive me time and again?

Join me tomorrow as I share the answers to those questions and the place God has me right now.

In the meantime,  How about you? Have you ever felt like your testimony wasn’t “good enough?” Tell me about it: what made you feel that way, what changed, or what hasn’t?