Fifty-one years ago, Martin Luther King Jr stood in front of the Lincoln Memorial and boldly declared “I have a dream!” What followed was a prophesy, a battle plan, a path for others to follow.

In the face of racism and oppression, MLK shared his heart and his hope:

I have a dream that one day, down in Alabama, with its vicious racists, with its governor having his lips dripping with the words of “interposition” and “nullification” — one day right there in Alabama little black boys and black girls will be able to join hands with little white boys and white girls as sisters and brothers.
I have a dream today!
I have a dream that one day every valley shall be exalted, and every hill and mountain shall be made low, the rough places will be made plain, and the crooked places will be made straight; “and the glory of the Lord shall be revealed and all flesh shall see it together.”
This is our hope, and this is the faith that I go back to the South with.


I listen to the controlled tremor of his voice and feel a thrill run down my spine. Now that is a great man with a great dream.

The Power of a BIG Dream 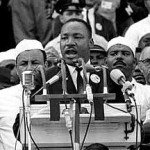 Many men and women have travailed throughout the history of America to obliterate racism. But MLK’s “I Have a Dream” speech was a pivotal point in the civil rights movement. Regardless of your political affiliation, you can’t deny the importance of that event. The speech that gave words to countless people’s dreams. The march that rallied black and white toward the same end goal. The dream that gave birth to thousands of other dreams.

MLK was a man like any other, subject to sins and weaknesses like us all. But he gave his dreams to God and asked instead to receive God’s bigger dream for his life. He dared to dream of something bigger than many of his contemporaries could have imagined. And over a half-century later, we’re much closer to seeing his dream become a reality, though there’s still much work to do.

You and I Have Dreams 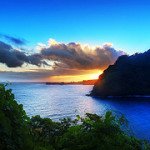 I dream of learning Greek and reading the New Testament in its original language. I dream of singing in a choir. I dream of saving enough money to go on an exotic trip. I dream of writing a best-selling book. I dream of dropping two dress sizes and looking good in a bikini.

I’m sure you have similar dreams, too. Just look at your New Year resolutions and you’ll get a pretty good idea of what your dreams are.

But the problem with most of these dreams is that they’re too small… and egotistic.

The Israelites and Small-Dream Fever

Abraham dreamed of having a son and passing on his accumulated wealth to give him the best start in life. But God had a bigger dream. He promised Abraham he would become the father of a great (innumerable!) nation and that all other nations would be blessed through his offspring.

The enslaved Israelites dreamed of overthrowing the Egyptian yoke and perhaps finding a quiet life for themselves in the surrounding hills. But God had a bigger dream. He led them out of Egypt (plundering them, no less!) and into Canaan to settle the land and become a special nation.

Israel dreamed of being as great as the surrounding nations so she asked for a king and got more than she bargained for. Her sins led her into exile, and all she could dream of was going back home. But God had a bigger dream. He promised Israel that the world’s Savior would come and minister in her land first, before reaching the gentiles.

Jesus’ disciples dreamed he would be the Messiah who would overthrow the Roman rule and restore Israel to her former glory, giving them significant roles in ruling the new kingdom. But God had a bigger dream. He sent Jesus as the Suffering Servant who would conquer sin and death by dying and raising back to life so that all nations would bow their knees before the Lamb of God.

God has a BIGGER DREAM for you, too

The Israelites put God into a box. They thought He was their God and interested in their prosperity as a nation. They could not fathom the extent of His plan of redemption for the entire world. They were too caught up in their own dreams for themselves.

But God has bigger dreams for you, just like He did for Abraham, the twelve tribes of Jacob, the nation Israel, MLK, and countless other heroes of the faith (the original Martin Luther, William Tyndale, Amy Carmichael, Jim Elliot, and Katie Davis come to mind). God wants to do something incredible with you, something beyond your wildest expectations.

Discover God’s BIGGER Dream for You

So how do you discover and live that dream? Most of us know the verse that God’s thoughts are higher than our thoughts, but let’s look at the context of those verses:

6 Seek the Lord while he may be found;
call on him while he is near.
7 Let the wicked forsake their ways
and the unrighteous their thoughts.
Let them turn to the Lord, and he will have mercy on them,
and to our God, for he will freely pardon.

8 “For my thoughts are not your thoughts,
neither are your ways my ways,”
declares the Lord.
9 “As the heavens are higher than the earth,
so are my ways higher than your ways
and my thoughts than your thoughts.
10 As the rain and the snow come down from heaven,
and do not return to it without watering the earth
and making it bud and flourish,
so that it yields seed for the sower and bread for the eater,
11 so is my word that goes out from my mouth:
It will not return to me empty,
but will accomplish what I desire
and achieve the purpose for which I sent it.
12 You will go out in joy and be led forth in peace;
the mountains and hills will burst into song before you,
and all the trees of the field will clap their hands.
~Isaiah 55


Does that get your pulse rushing like it does mine? Does it awaken in you the desire to discover God’s dream for you?

Spend time with Him.

Repent of your sins, of your small view of God, of your selfish dreams.

Ask God to speak His Word over your life, and walk in amazement at what He makes happen.

I have a dream… but it’s too small. So I’m going to lay it at Jesus’ feet and ask Him to give me God’s bigger dream instead.

What are you going to do with your dream?