It was the brightest part of my day: running to the mailbox of our Romanian home to see what the postmistresses had brought us. 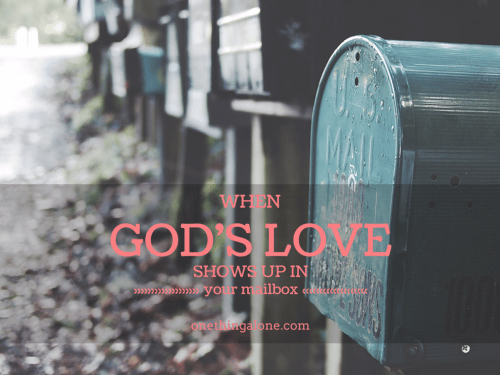 For this young missionary kid, the envelopes with American stamps were the most exciting because they spoke of intentionality, distance, prayers, and sometimes even stickers. There were brown paper packages bringing Christmas gifts (like The Christy Miller series!) from supporting churches and loads of birthday cards every March. And of course, the occasional “Thinking of you” card covered with signatures, each belonging to a woman in the US who was thinking and praying for us during their weekly ladies’ night.

There were cards from my grandmother, assuring us of her love and affection from miles away, and giant boxes of cereal, peanut butter, and M&M’s from my aunt. There were letters from pen pals both in Romania and far away, dotted with stickers and colored glittery pens. And there were the letters from my childhood sweetheart, first written to my older brother and I and later dropping the pretense of a chaperon and addressed only to me. (And my heart went pitter-patter.) 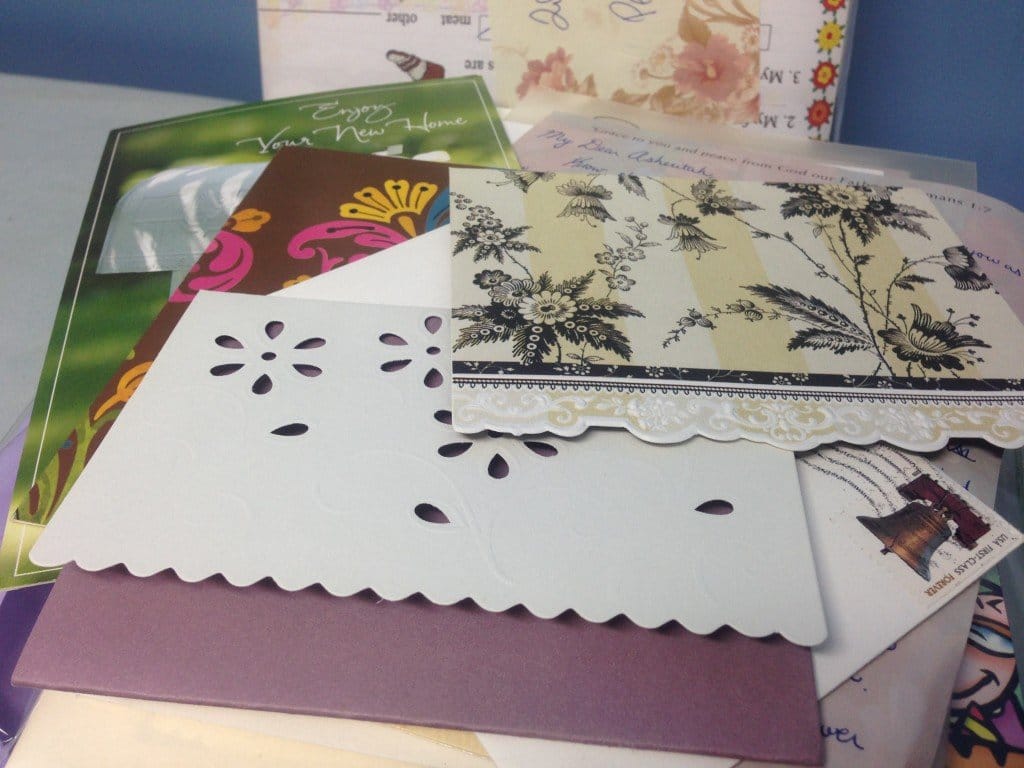 I kept them. Each and every letter that has ever been addressed to me is stored in ziplock bags, cataloged by year and rubber-banded together. I pull them out and finger them, each letter a distinct moment in time, each sender an overflowing well of encouraging words and prayers. And fifteen years later, this little mountain of letters is my own altar of worship to a God who sees and cares enough to send encouragement in the form of paper envelopes arriving at just the right time. 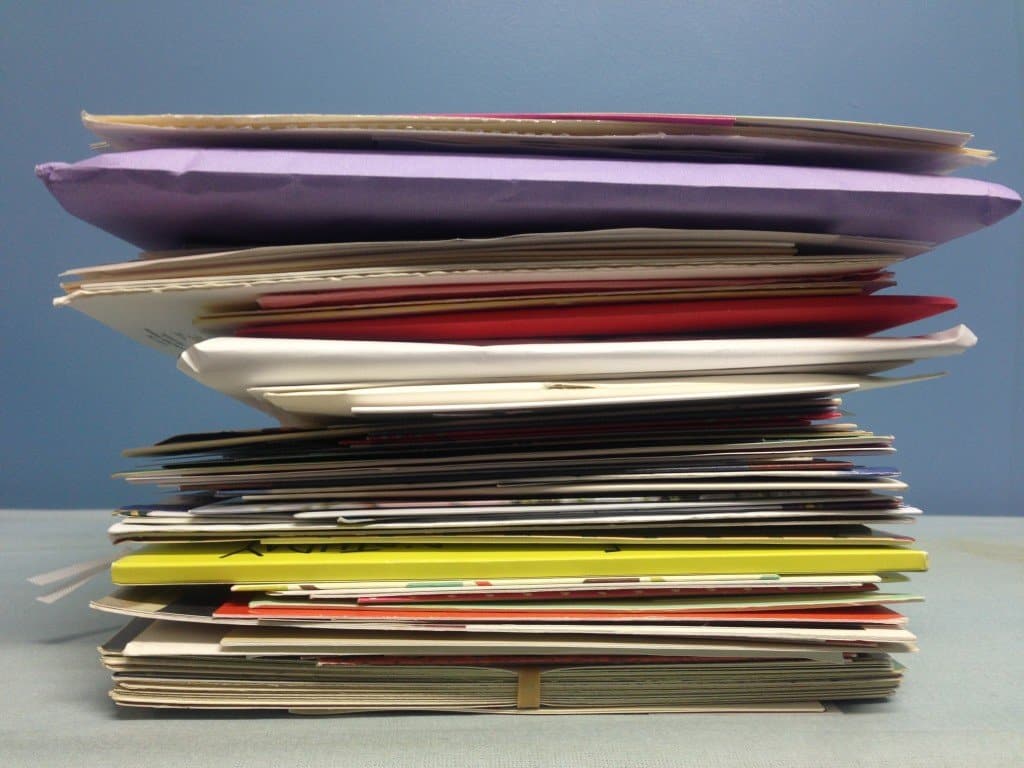 And now it’s my turn.

I’ve collected stationary and cards over the years, each purchase marked by good intentions but the towering stack speaking volumes of my lack of follow-through. And these words speak straight to my heart:

And I know she’s right. God has given me words to speak not only in public forums and online blogs but also in the quietness of letters and cards penned for the eyes of only one. Words that will never make headlines but may lift spirits. Words that may not move mountains but may bring a smile to someone’s face. Words that may be the vehicle of God’s grace in someone’s life today, just like those letters from my childhood.

Your words may not make headlines but they can lift someone’s spirits. #wordsmatter 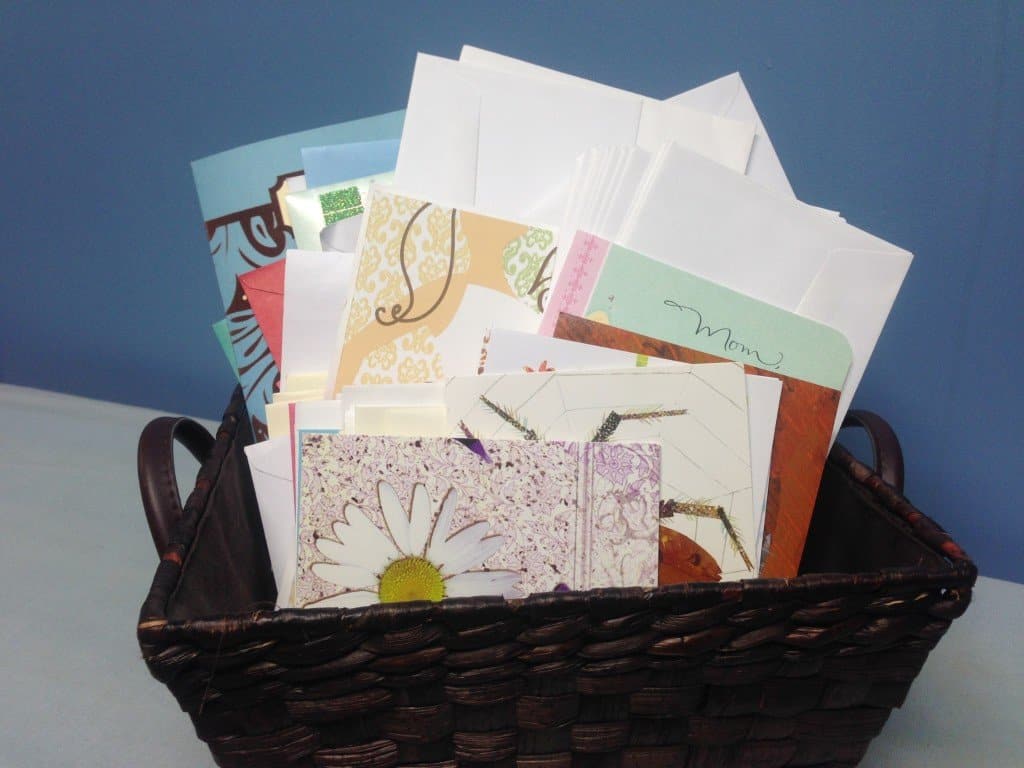 So I’m going all in. No more believing that “One card won’t make a difference” or “I don’t have time right now” or “My words don’t matter.” I’m going wild with encouragement until I empty my basket of collectible cards. And then I’ll keep on sending.

Because sometimes God’s love shows up in my mailbox, and I want it delivered to other mailboxes too.

What about you: Have you received a letter in the mail at just the right time? Is there a card you’ve been meaning to send but have been putting it off? Let us know in the comments below!

If you want to send encouraging letters to women around the world, consider joining the #fmfpartysnailmail community! Born from the Five Minute Friday community’s desire to send and receive more than junk mail, this group of women send one card filled with encouragement and prayers each week for 7 weeks. Seven cards sent, seven cards received. It’s community in your mailbox. Want to join? Check out more information here. 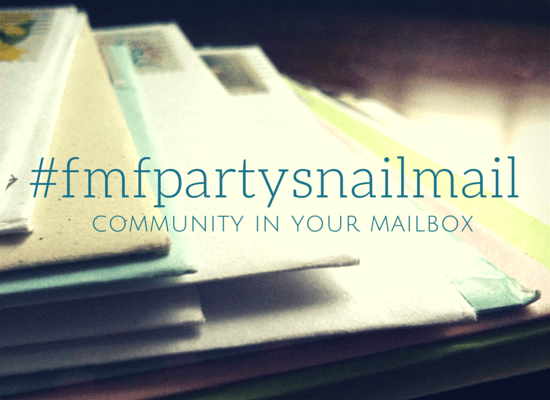