I’m linking arms with awesome Lisa-Jo Baker over at Five Minute Friday, celebrating the upcoming release of her new book Surprised by Motherhood. If you want to get a hold of a free signed book plate, just go here.

David was a great man. But even he wasn’t able to do it on his own.

David was great because he had a company of MIGHTY MEN who fought alongside him.

That little shepherd boy who beat the giant with just a sling? The one who went on to defeat the Philistines and who reclaimed Israel from the dumps of the time of Judges? That David who restored order to Israel and made plans for the beautiful temple. He valiantly roused the troops and killed tens of thousands. The David who became a national hero.

But David was only as great as the MIGHTY MEN who had his back.

Men who put their lives on the line with him. Men who sneaked past enemy lines to get a cup of water from his childhood well. Men who slayed giants and men who rushed across mountaintops in the dark. Men who were inside informants and men who encouraged David when he was in the pits of despair.

Men like Eleazar, who “stood his ground and struck down the Philistines till his hand grew tired and froze to the sword.”

Men like Abishai, who “raised his spear against 300 men, whom he killed.”

Men like Benaniah, who “went down into a pit on a snowy day and killed a lion.”

David was great, but only because of his MIGHTY MEN.

Friends, we all need a company of MIGHTY WOMEN. If you’re trying to do this journey of womanhood, of motherhood, of wifehood alone, you’re missing out on the great joy of doing life with MIGHTY WOMEN.

We need women to laugh and cry with, women to bring us a basket of fruit “just because” and women who don’t mind our garlic breath when we’re trying to kick that sinus infection. Women who will toil on their knees for our children and women who will do the happy dance when our baby girl gets her first tooth.

We need each other.

And someone needs you. 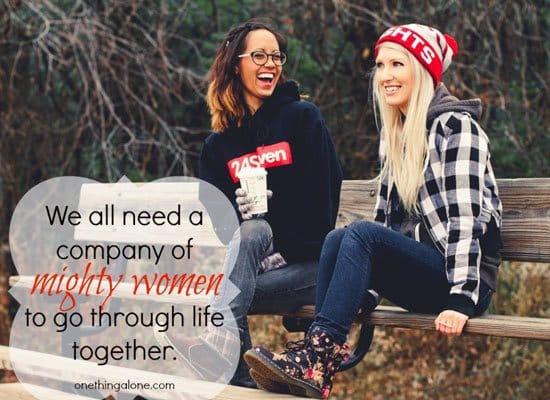 Do you have a company of MIGHTY WOMEN to do life with? Are you a MIGHTY WOMAN for someone in your life? Share with us in the comments below.